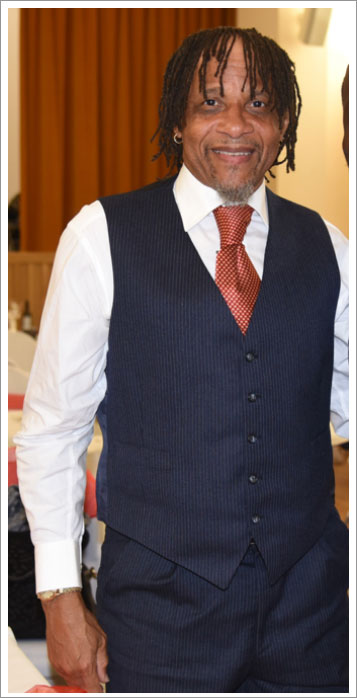 The Ambassador of Bisong Foundation – Cyrille Makanaky, Retired but Not Tired.

One of the architects of Cameroon’s finest footballing hour is today a veritable philanthropist, brand ambassador of the Bisong Foundation.

Cyrille Makanaky is a Cameroonian retired footballer, born on June 28th 1965 in Cameroon’s economic capital, Douala. He played as an attacking midfielder. At the age of 27 years 3 days, he was transferred from CD Malaga to Villarreal under Coach Osman Bendezu. He also played for Lens, GFCO Ajaccio, SC Toulon, and Barcelona SC, his last club before retiring in July 1, 1997.

Makanaky, the game changer in Italia ‘90’ is unarguably, one of those players alongside great names like Albert Roger Milla, Francoise Omam Biyik, Andre Kana Biyik, Thomas Nkono, Ndip Akem Victor etc. who contributed immensely in changing the face of World football at the Giusepe Maezza stadium in Milan, where the Indomitable Lions if Cameroon ‘a humble team with an insignificant past’ according to the Miami Herald, came, competed and conquered.

The breakthrough of ‘1990’ came after a foul on Makanaky. Emmanuel Kunde took the free kick which was headed backwards by Makanaky to Oman Biyk who then glided up in the air to head past Pumpido, arguably the greatest upset in football history.

Cyrille Makanaky is today making himself available to support the work of the Bisong Foundation.

The foundation is using his powerful influence as well as other legends to bridge the gap/mobilise the community and promote personal, social and community development, raise awareness of domestic violence and knife crime, build a united society where everyone is valued irrespective of ethnicity, religion, sexuality, disability or any other perceived differences.

A society where everyone feels they belong to, promote good health and behaviours through social inclusion, fair play, fun and excellence at every level, and helping to empower people and building self-esteem.

“we are more than happy to have such a personality as our ambassador” says the founder Michael Bisong who also represented Cameroon at the junior levels.